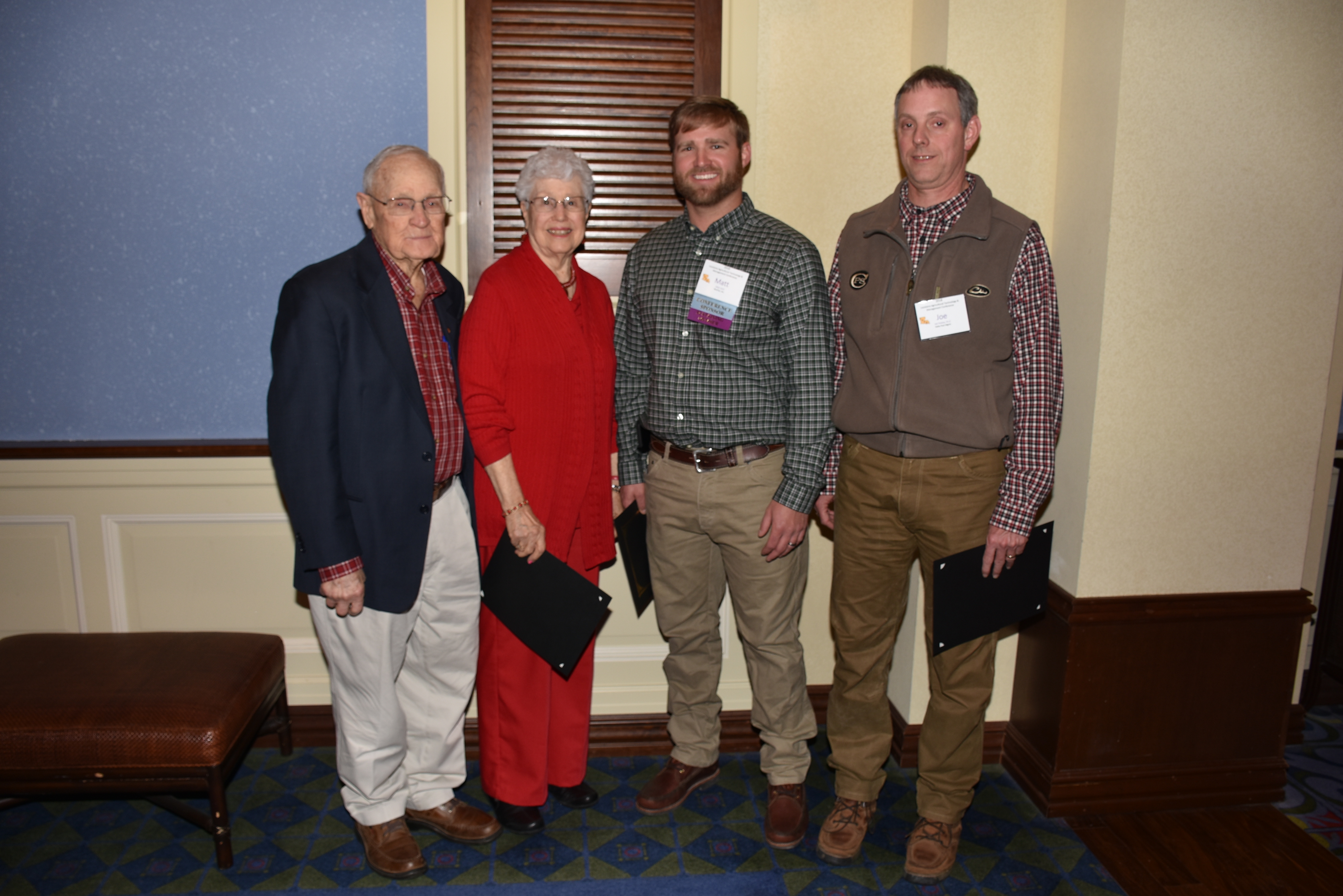 This year’s recipient of the undergraduate scholarship funded by Ray & Dorothy Young, CPS, and RiceTec was Mr. Brayden Blanchard.   Mr. Blanchard is from a multigenerational sugarcane farming family in St. Martinville, LA where he worked on the family farm after school and during the summer.  Brayden  developed many farming skills as a result of performing the various farm labor tasks required in a sugarcane farming operation.

In high school, Brayden was selected to participate in a dual enrollment college program at the University of Louisiana Lafayette and Louisiana Tech University.  He participated in this program from 2014-2016 and graduated in 2016 from Teurlings High School in Lafayette, LA.  Mr. Blanchard was an honor graduate with a 3.98 GPA and scored a 31 on his ACT which earned him a TOPS scholarship and a Chancellors Scholarship.  He was the recipient of a Merit Scholarship from the American Society of Sugar Cane Technologists.   Brayden was inducted into the National Honor Society and the National Beta Club.  In addition, he was selected to receive a Presidential Award for academic excellence.

His leadership activities included Campus Ministry Retreat Team Leader; Eucharistic Minister; and Most Outstanding Senior Male.  He was an All State, All District, and All Academic Football and Soccer Player serving as the Varsity Soccer Team Captain.   Brayden was also chosen as the Olympic Development State Soccer Team Player.

Mr. Blanchard currently attends LSU Baton Rouge.  He is majoring in Plant and Soil Systems and is employed at the sugarcane research station.  His duties include assisting in the sugarcane breeding program and various other research projects.  Brayden has experience in planting, cutting, sorting, and tagging sugarcane varieties.   He also operates and maintains farming equipment and has experience in the application of ag chemicals.

Brayden is on the Dean’s List with a GPA of 3.9.  In addition, he was inducted into Phi Eta Sigma Nation Honor Society.  Mr. Blanchard serves as the Social Service Chair and Founding Father of Alpha Tau Omega Fraternity---where he coordinates service events in support of local charities and other organizations in need of assistance.    In December of 2017, Brayden served as the coordinator of a Haiti Mission Trip.  His responsibilities included organizing, planning, and obtaining support for an upcoming service mission.

Mr. Blanchard’s volunteerism includes support of many charities in Baton Rouge including Our Lady of the Lake Children’s Hospital and Children’s Miracle Network, the Capital Area Alliance for the Homeless and volunteering for the Special Olympics.

In addition to being an outstanding individual and student, Mr. Brayden Blanchard represents the best our ag industry has to offer for the future. 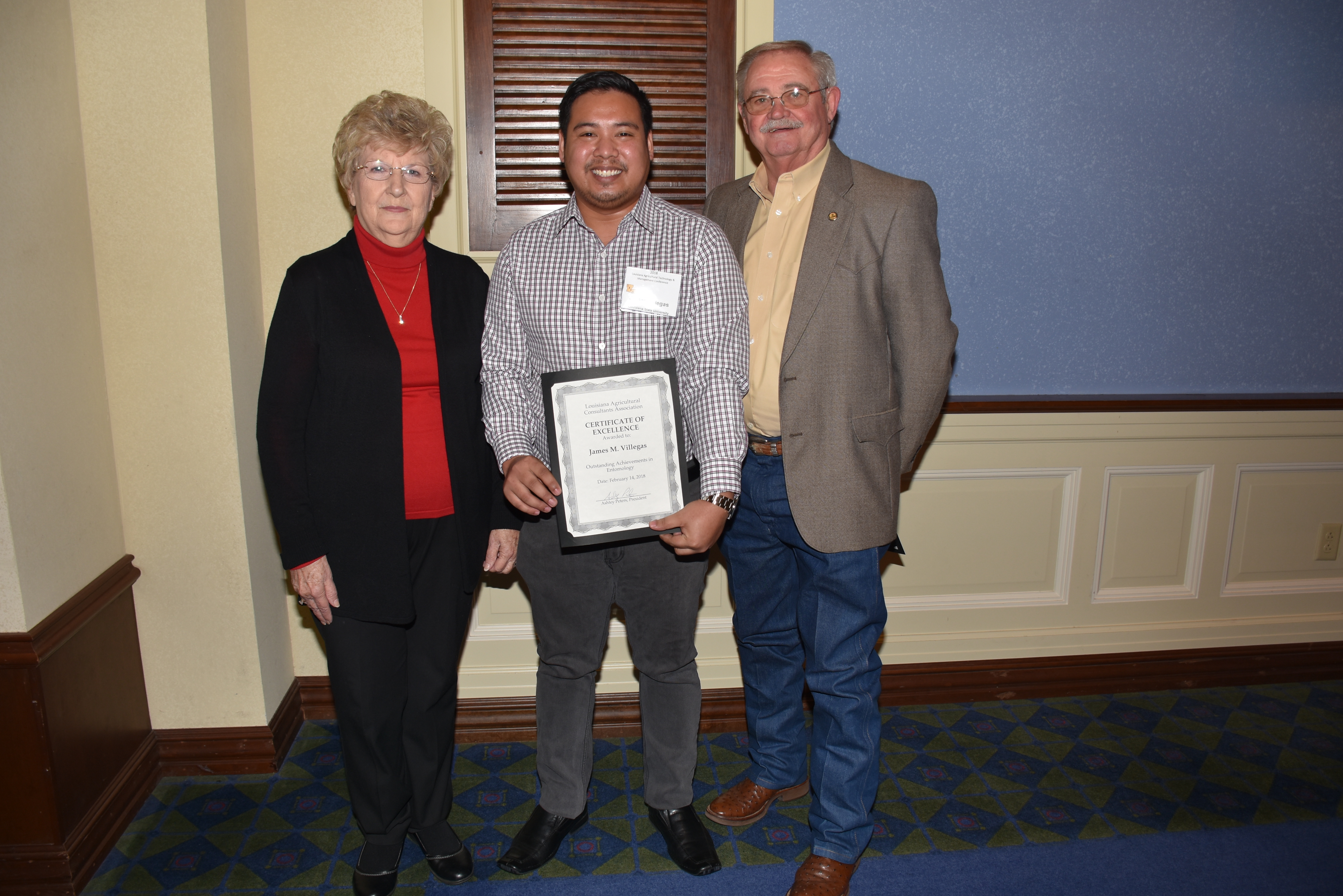 Mr. Villegas was born and grew up in an agricultural community in the Philippines.  It was his experiences in this farming community that influenced his intense interest in agriculture.  He attended Negros Occidental High School and was the recipient of an Academic Excellence Award and an American Field Service Youth and Exchange Study Scholarship.  The latter permitted him to study at the Menaul School in Albuquerque, New Mexico from 2005 through 2006.  He returned to the Philippines to complete high school and graduated as Salutatorian.

Mr. Villegas enrolled at the Ateneo de Manila University on two full academic scholarships and earned a BS degree in Life Sciences.  During his undergraduate studies, he was a research assistant and conducted molecular analyses on rice ragged and grassy viruses.  He was awarded the Departmental Research Award for his work on these viruses.  James also mentored eight undergraduate students in their research projects.  After graduating, he worked at the International Rice Research Institute in the Entomology Department.  He was a project and research coordinator for a countrywide integrated pest management program for sustainable rice production.

In 2015, James came to LSU Baton Rouge to work on a Master’s degree in entomology under Dr. Mike Stout.  His thesis research is on the Effects of Soil Silicon Amendment and Nitrogen Levels on Rice Insect Pest Complex.  As a graduate research assistant, he also conducts multiple field, greenhouse, and laboratory research that focuses on rice pest management.  In the Fall, 2016, James was the laboratory instructor in the entomology course titled, “Insects in the Environment.”

Mr. Villegas has 6 referred publications, 3 extensions publications, 3 manuscripts in preparation and 16 presentations at scientific meetings.  In 2017, he was the recipient of the Outstanding M.S. Poster Presentation Award given by the Southeastern Branch of the Entomological Society of America.

James is a member of the Entomological Society of America, The International Society for Silicon in Agriculture and Related Disciplines and the American Field Service of the Philippines.   He is a member of the LSU Entomology Club and has served as its treasurer.  In addition, James participates in numerous community outreach programs which includes introducing high school students and others to insects. 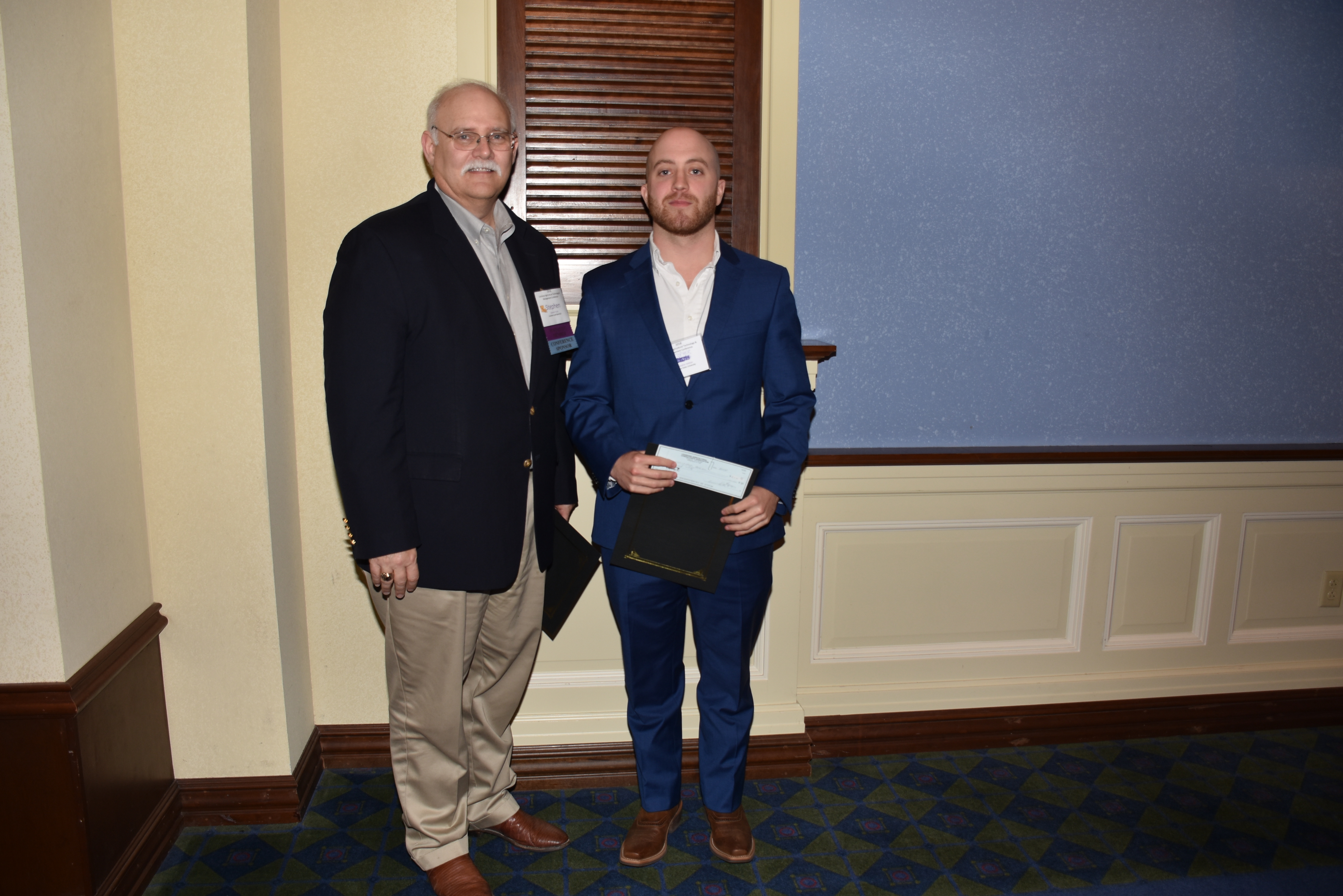 The recipient of the PhD scholarship funded by Louisiana Land Bank was Mr. Christopher Addison.

Mr. Addison grew up in rice country in Hazen, Arkansas where he worked with his grandfather on a rice farm.  It was through his experiences that he developed an understanding and appreciation of agriculture.

Chris graduated from high school in Hazen, AR in 2008.

He began his college career as an undergraduate animal science major at the University of Arkansas.  While pursuing his animal science degree, he was given an opportunity to work in wheat breeding.  As a result, Chris became very interested in plant genetics.

In 2012, Mr. Addison received both the Outstanding Senior in Animal Science and the Outstanding Student in the College of Agriculture.  After obtaining his Bachelor of Science degree, he continued his education by pursuing a Master’s degree in plant genetics, specifically wheat genetics.    His research was on genetic mapping of yield and NDVI in soft red winter wheat.  Chris was awarded an opportunity to attend the Wheat Improvement Strategic Programme where he enrolled in a course on wheat genetics at the John Innes Centre in Norwich, UK.  It was his experience in this course that showed him the importance of international collaboration for the advancement of agricultural science.

After obtaining his Master’s degree, Mr. Addison spent six months in Columbia where he studied and observed the role of agriculture and its socioeconomics impact.  His experiences further solidified his interest in genetics and plant breeding.

Chris began his doctoral studies at LSU Baton Rouge in 2015.  His research was initially on drought tolerance in rice.  Later, his research shifted to studying quality traits, and the identification and isolation of a gene that controls Cercospora resistance in rice.  His advisor, Dr. Adam Famoso, gave Chris the opportunity to live on the Rice Research Station in Crowley where he accepted more responsibilities in the daily operation of the station.  In addition, he developed a better understanding of the foundation of a successful breeding program.

Mr. Addison has served as the president of the Graduate Student Association in the School of Plant, Environment, and Soil Sciences.  In 2016, he was awarded second place in the Genomics, Molecular Genetics, and Biotechnology Oral Competition at the ASA, CSSA, and SSSA International Annual Meeting.  He was also awarded a grant from the Asia Rice Foundation.  Chris attended a Rice Research Production course sponsored by the International Rice Research Institute of the Philippines.

Mr. Addison has 4 publications, 7 abstracts, and 6 presentations at scientific meetings. 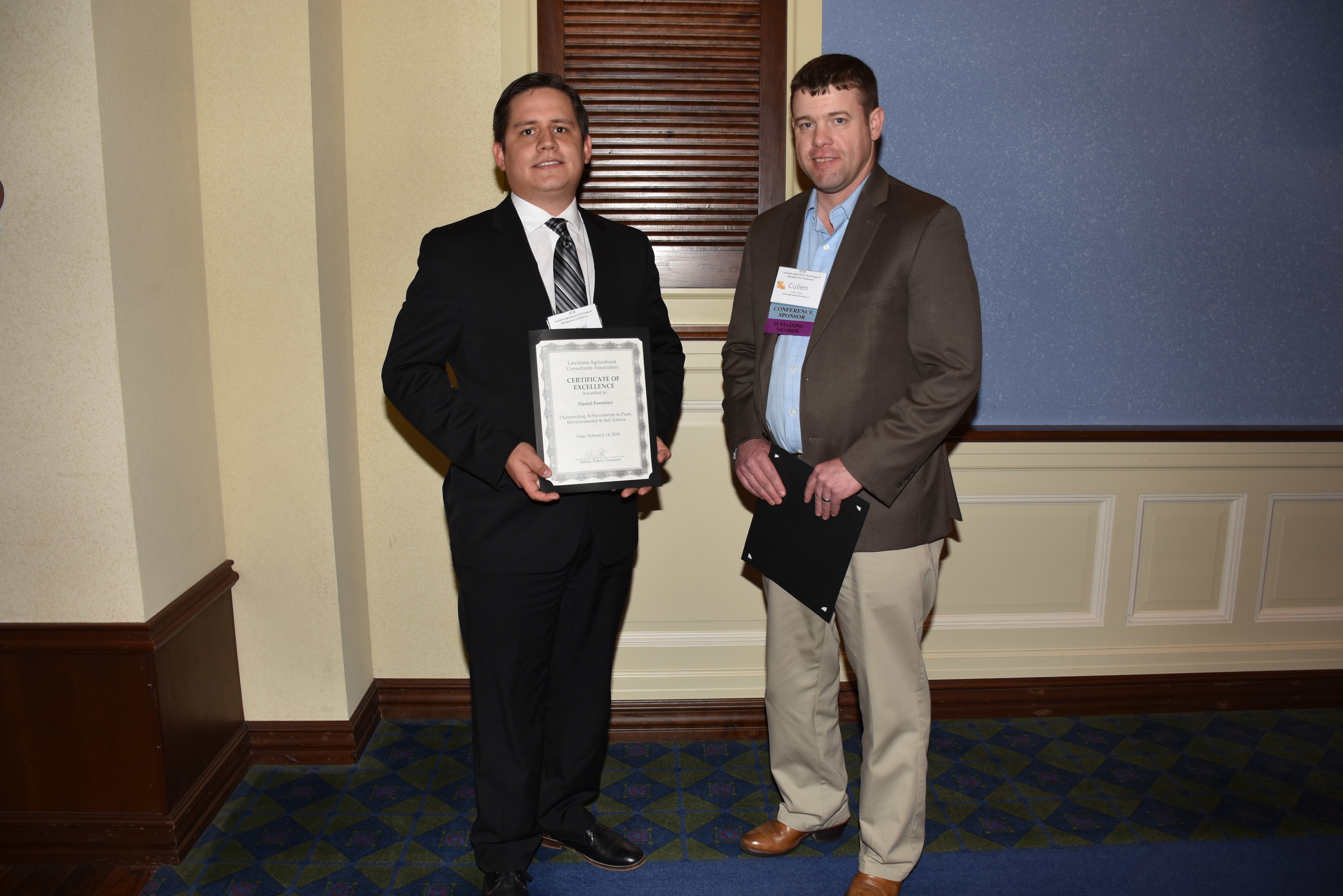 The recipient of the PhD scholarship funded by AgBiTech and Koch Agronomic Services was Mr. Daniel Forestieri.

Mr. Forestieri was born in Ecuador and attended the Zamorano Pan-American Agricultural School.  In 2009, he received the Outstanding Student of the Year award, and in 2013, he received his bachelor of science degree in agronomy.

Mr. Forestieri enrolled at LSU in January 2014.  After an internship on managing nitrogen for major crops of Louisiana, he pursued and obtained a Master of Science degree.  Daniel worked under the direction of Dr. Brenda Tubana in the School of Plant, Environmental, and Soil Sciences on a project whose overall goal was to improve nitrogen management in sugarcane production in Louisiana; specifically, on establishing the optimum rate of the right source and application method of nitrogen fertilizer. He also validated the use of remote sensing technology for in-season prediction of sugarcane response to nitrogen fertilization.

Mr. Forestieri is currently pursuing his Ph.D.  His research is in plant nutrient management and ag precision, namely: 1) the utilization of winter cover crops in sugarcane to improve soil physical properties and nutrient management, 2) evaluation of the relationship of NDVI readings collected from UAVs and a GreenSeeker ground-based sensor for major crops in Louisiana such as sugarcane, rice and cotton, and 3) evaluation of different sources of foliar and soil N fertilizer to determine the effects on sugarcane's yield and quality and evaluate the appropriate nitrogen rate and source.

Mr. Forestieri has authored and co-authored 23 publications.  In addition, he has five professional meeting presentations and abstracts.

Daniel currently is the laboratory instructor for the Soil Fertility and Soil Management class.  He is a member of five professional societies in agriculture.  In 2015, Daniel was selected as the Outstanding Graduate Student by Gamma Sigma Delta Honor Society.  In 2016 and 2017, he received the Fellowship award from the American Society of Sugarcane Technologist.

One of his recommenders stated, “With all his achievements, positive attitude, leadership potential and academic proficiency, Mr. Forestieri is unquestionably an individual who I believe will continue to bring significant contributions to our scientific community.”