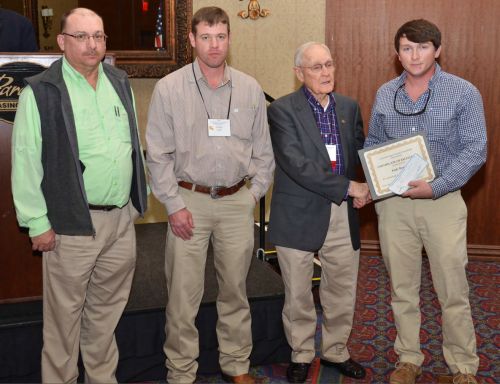 Mr. Beavers was born in West Monroe, Louisiana and lives in Fort Necessity. He graduated from Franklin Academy ranking 4th in his class. A member of the National Honor Society, Beta and a graduate of the Louisiana Young Producers Program, Kody was recognized by Who’s Who Among High School Students and won both regional and state science fairs and the science Olympiad.

Currently, a senior at LA Tech, Kody is majoring in agribusiness and has earned a 3.7 GPA. He is on the President’s List, the Dean’s List and is one of the 2016 Featured Agribusiness Students. Mr. Beavers is the Vice President of the plant science club Greenscape, a member of Alpha Zeta Honor Fraternity, and employed by the Louisiana Tech greenhouse, where he helps growing bedding plants, vegetables, and poinsettas.

Proactive in agriculture, Kody started working on Bouef Prairie Farm at age 14. He also worked for Gilmore Farms and Company. His farm experience includes tillage work, planting, spraying, irrigation and harvesting crops including corn, cotton, soybeans and wheat. One of his recommenders commented. “When he starts a job he shows enthusiasm and attends to the task until completion. His strong work ethic is exemplary for someone his age.”

Currently, Kody holds a Louisiana Private Applicators License and is planning on becoming certified as a Louisiana agricultural consultant. Upon graduation from Tech, he plans on pursuing a Masters degree in agricultural economics. 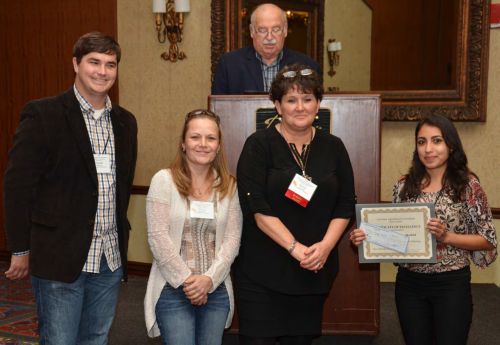 The scholarship for a Masters student in agriculture was sponsored by the Louisiana Agricultural Consultants Association and funded by Pest Management Enterprises, LLC.

The recipient of this graduate student scholarship is a student at Louisiana State University who is pursuing a Master of Science degree in plant pathology and crop physiology, Ms. Alejandra Jimenez Madrid.

Ms. Madrid is from Honduras and attended high school at the Institute of Santa Cruz del Oro, where she excelled in academics and graduated second in her class. She attended the National University of Agriculture where she majored in Natural Resources and Environment Management. Ms. Madrid received several honorary Diplomas of Recognition for placing first in Disciplinary Performance; Field Performance; and Academic Performance. Ms. Madrid also worked on biological education for school children.

Her bachelor’s degree research project was conducted in cooperation with the Range Cattle Research and Education Center at the University of Florida and involved the capture and distribution of soil organic carbon under different agro-pasture systems. She is the lead author of a publication on this research project.

After graduation, Ms. Madrid served as Coordinator of the Gender Unit at the National Institute of Women in Honduras where she worked on creating programs and projects to benefit women and to implement gender equality and improvement of women rights.

As an intern/visiting scholar during 2014 at Louisiana State University, Ms. Madrid worked as an assistant on research projects with faculty members in Plant Pathology and Crop Physiology. Currently, she is working in horticulture pathology under the direction of Dr. Melanie Lewis Ivey. Her research is on the identification and evaluation of sources of bacterial wilt resistance to strains of Ralstonia solaracearum in Louisiana soils, a disease that can result in severe economic losses in tomato, eggplant, and peppers grown in Louisiana. The outcome of this research should provide growers with a sustainable management practice to reduce bacterial wilt and increase crop productivity.

In addition to her coursework and research, Alejandra is active in the Departmental Graduate Student Association. She also works with the Departmental of International Affairs setting up a program to assist students with the transition from Honduras to university life at LSU.

One of her recommenders commented that she has a strong work ethic and has made significant progress in her research and has a strong interest in bringing sound science to practical agriculture. 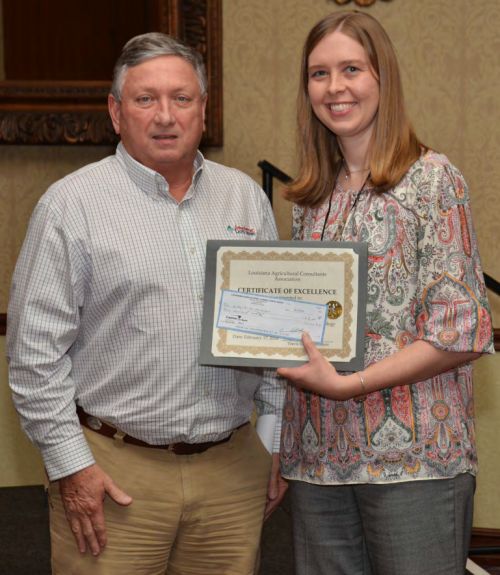 The second graduate scholarship was awarded to a doctoral student majoring in agriculture and sponsored by the Louisiana Agricultural Association and funded by Louisiana Land Bank, ACA. The recipient of the PhD scholarship was Ms. Mary Ferguson, who is pursuing her doctorate in Plant Pathology and Crop Physiology at Louisiana State University in Baton Rouge. Ms. Ferguson was born in Bogalusa and graduated from St. Scholastica Academy in Covington, LA where she ranked 3rd in her class.

Ms. Ferguson was the Service Learning Project Coordinator and worked with students developing gardens at a local high school and an elementary school. Mary was a farm assistant for Educational Concerns for Hunger Organization and conducted classes, demonstrations and developed materials related to agricultural development. She was awarded the Hess Award for Leadership and Service.

Mary received her masters from North Carolina State University in Horticultural Science. While a student at NC State, Mary was a research and teaching assistant. Her research was on the use of several composts in strawberry production. Her thesis was the ‘Evaluation of Three Commercially Available Composts for Use in Strawberry Production.’ She presented a poster on her thesis research and gave an oral presentation at the Southeast Strawberry Expo. While a graduate student, Mary taught courses in Nursery Management, Landscape Maintenance and Small Fruit Production. Ms. Ferguson was inducted into Phi Kappa Phi and Gamma Sigma Delta honorary societies.

After graduation, Mary worked as an Extension Agent for Agriculture in North Carolina. She conducted numerous classes, demonstrations, field days and other educational activities. Mary published monthly newspaper & magazines articles and e-mails on listservs. She also did regular radio spots and appeared on TV. Mary was the coordinator of the county’s Master Gardener program and served as the pesticide education coordinator for commercial and private applicators.

In 2009, she was recognized by the North Carolina Association of County Agents and presented with the Young Agent Scholarship. Mary is the author of more than 60 abstracts, articles, newsletters and other publications. Mary helped coordinate and/or taught Pesticide Use Review, Fruit Disease and Insect Management, Turf Weed Management and Pesticide Safety, Pesticide Safety for Commercial and Private Applicators, Disease and Insects of Landscape Ornamentals, Landscape Insects: Fire Ants and Other Key Pests, Air Blast Sprayer Calibration and numerous others.

She enrolled in the PhD program in the Department of Plant Pathology and Crop Physiology. She has completed 60 hours of credit in the department and an additional 11 hours in entomology, which is her minor. She has an overall GPA of 4.0.

Ms. Ferguson is very active in the Graduate Student Association and the American Pathological Society. She is a member of the Plant Sciences Journal Club and served as the student representative to the APS Southern Division executive board. In addition, Mary is a reviewer for the scientific journal, Plant Disease, published by the APS. She has helped extension by updating the blueberry and strawberry sections of the plant disease management guide; has taught Master Gardener classes on plant pathology; and answered questions through the eXtension Ask an Expert website.

In 2015, Mary received the C. W. Edgerton Honor Award given by the Department of Plant Pathology and Crop Physiology. Ms. Ferguson has worked on agricultural related projects for the Dominican Republic, Mauritania, and Uruguay.

Her dissertation research is focused on the bacterial pathogen Xylella fastidiosa in rabbiteye blueberries. Mary’s research has shown significant reduction in yield and altered fruit quality by this pathogen.

One of her recommenders stated, “As I have watched her interactions with growers, it is evident that they quickly value and respect her and appear glad to be involved with her research as they see the value it will have for their operation.”